One of the main questions people ask about the Green New Deal is "how are we going to pay for it?"
This is a valid question, with a simple answer, one that came up very often in the notes from various town halls in Ottawa, tax/fine the richest members of our society as well as the big corporations that are profiting off of the destruction of our planet.
Recently I've been seeing articles/pictures circulating with various estimates of the overall "cost to solve climate change" (globally), these numbers are typically in the hundreds of billions, which makes it seem pretty daunting. But once you consider that 5 of richest individuals alone have MORE than enough to meet this (I think) imaginary quota, it seems a little less intimidating.
Obviously, we don't need to go and ask these individuals to give up most of their money to pay for the solutions to this issue. After all, they (by they I mean people like Jeff Bezos, Bill Gates, Warren Buffet, Mark Zuckerberg and Larry Ellison) cannot be singlehandedly blamed for the current state of the planet. But if 5 people can pay to invest in the green energy we need (including technology - new and existing, and offsets - like planting more trees), then the big oil and gas companies can definitely spare some of their profits to do the same. Considering they are directly responsible for our situation, it only seems fair.
I know in Canada, Justin Trudeau has been saying that we need to build the Trans Mountain pipeline in order to pay for our green transition, but we know that profits from our existing non-renewable infrastructure could also do this job.
People make it seem like the biggest issue we have with moving forward with a Green New Deal is money, but in reality we have more than enough, we just don't have any politicians that aren't scared to fairly tax the richest members of our society and corporations. No one individual or company needs BILLIONS of dollars when there are people who don't even have a living wage.
I know this doesn't directly answer how we might pay for some of the changes we might be proposing in Ottawa, but it does give us some ideas..... 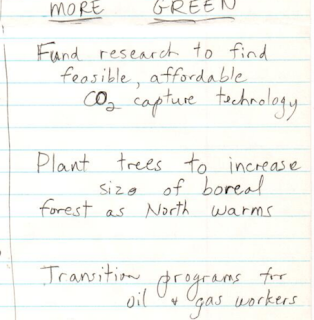 The Ottawa Coalition for a GND will obviously be focusing on municipal-level ways to fight for climate justice and a Green New Deal, but I think addressing the idea of a just transition is important. While anyone reading this will probably understand that as a country (and a world) we all need to be lowering our fossil fuel emissions in order to keep our planet habitable. Considering Canada has been one of the top ten global emitters of fossil fuels for over a decade, we need to be cutting emissions drastically and quickly. Knowing this, I think that people's first (logical) idea is to stop our oil and gas extraction projects (aka the pipelines and the oil sands). It is no surprise that provinces like Alberta and Saskatchewan, where most people's livelihoods rely on projects like these, are not typically supportive of this idea; which can mean that talking about any kind of climate action would be threatening and isolating to these people. My own father used to work out in the oil sands of Alberta for over 10 years - and as is the case with many oil and gas workers - he didn't want to be there. The job resulted in him being away from home for weeks at a time, living in a camp with a bunch of strangers and pushing himself physically for most hours of the day. My parents had just moved to Canada, with no friends or family in the country, so my mom had to stay at home to take care of my brother and I, and there weren't many high paying jobs in my city. Most oil and gas workers understand that this is not a good thing to be doing (for themselves or the planet), but because the pay is good, they are trapped.
If given a similar paying option in a green industry, and some training for them to adapt, I'm sure there would be more converts to the Green revolution.
Many (unfortunately, not all) oil and gas workers know that climate change is an issue, and want to do more, but we can't leave these people behind in the transition to a green economy.
So even on a municipal scale, acknowledging that oil and gas workers aren't the enemies, but the large oil and gas corporations profiting off them are, is essential.
For a true Green New Deal, we need everybody.